This is something I am carrying on from my old blogs on good old Myspace, it was something I came up with as a concept idea as I was a bored student most of the time and decided to put together some things for what I really loved – films, comics and definitely games.

It is something I would have loved to have seen in the 90s when most of these actors were in their prime doing their stuff, not now.

As a fan of the Fatal Fury games in the 90s, I used to always think it would have been amazing if it was turned into a film, I was such a big fan that I even came up with the characters that could be played by these actors.

So here it is and do give me your opinions and let me know what you all think!

WHY? Loren Avedon has played many American martial arts heroes in films and with his skills as a martial artist (master of Korean arts; Tae Kwon Do and Hapkido) with amazing kicking ability, equally with both legs, he’s the right man to play the All-American hero – Terry Bogard. Whose skillset consists of various kicking moves, and also, I think Loren will look good in blonde hair too.
Brad Pitt as Andy Bogard 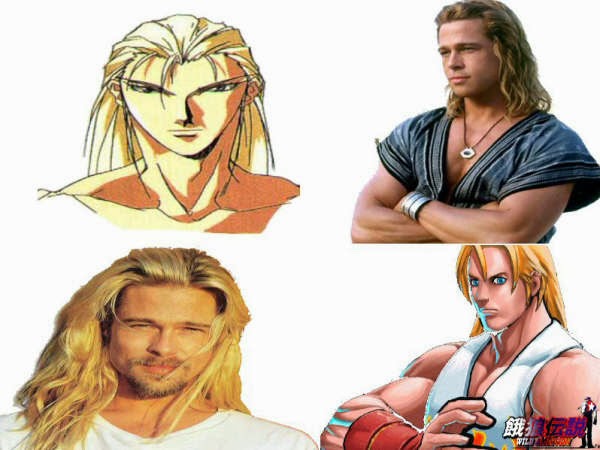 WHY? Not only is he a great actor but quite an adept athlete too (as seen in Troy), also if the likes of Keanu Reeves could do what he did in the Matrix films, Tom Cruise do the same in the Mission Impossible series of films, Cameron Diaz do what she did in Charlie’s Angels films and even Eric Roberts do The Best Of The Best, then Brad Pitt can definitely do Andy Bogard – whose art is more punch based than his brother, Terry’s.

WHY? I know many will say Tony Jaa but he is Thai and Joe Higashi is Japanese, I understand that Robin Shou isn’t Japanese either but he is a better choice in terms of looks and also being trained in San Shou/Sanda (Chinese Kickboxing) AND Muay Thai, he seems to be the best choice so far – without mentioning Cung Le; cos I didn’t want a professional fighter but an actual actor for this part.
Gary Daniels as Billy Kane

WHY? Just look at this pic, they look just like each other and they’re both British! Gary Daniels is a British martial artist who trained in various styles, not to be underestimated, and instead of getting an American martial artist/actor to play this part with a bad British accent (which I do not wish to see & hear as I have seen and heard WAY too many), I think Gary Daniels is right for the part of this British bo-staff fighter, Billy Kane.

WHY? I know one is blonde and other has dark hair but they do have other similarities. Their fighting styles are very similar – Aikido, Jujutsu, Bushido, Kobudo, etc. Samurai/Japanese style martial arts with lots of counter attacks and throws. Also, their characteristics are very similar too – the slicked back hair, Japanese fighting style and of course being very arrogant!

WHY? A towering psychopathic Yakuza gangster/thug, seeing Bruce Locke play the Japanese corporation’s cyborg in Robocop 3 and also the treacherous Shang Tsung in Mortal Kombat Conquest TV series, I could not think of anyone better and also standing at 6’2″ tall he has the height, build, talent and looks to play this crazy criminal.

WHY? A break dancer with martial arts skills too (black belts in Goju Ryu Karate, Tae Kwon Do and Capoeira), who other than the guy who played one of my favourite Power Rangers back in the days to play the funky dancing street fighting b-boy, Duck King, with skills just like “Hip Hop Kido” (Zack Taylor the Black Ranger’s martial arts mixed with dancing) he looks the part and can definitely pull off the moves too.

WHY? I know this character is inspired by Mike Tyson (like Balrog/Mike Bison from Street Fighter) but after seeing Stan Shaw, playing a boxer in the film Snake Eyes (as seen in the pic), with Nicolas Cage and also a boxer in the first Rocky film (Big Dipper), he’s one of the boxers in Mickey’s gym who gets Rocky’s locker. An excellent actor and from what I have seen in Snake Eyes & Rocky, definitely the man for the job.
Telly Savalas (RIP) as Axel Hawk

WHY? Whenever I saw Kojak reruns on TV, I always thought that Telly Savalas would make an excellent Kingpin back in the days, if there was ever a Spiderman and/or Daredevil film; he had the height, build and the looks. When I first played as Axel Hawk, I thought it was the Kingpin with boxing gloves on.

WHY? After seeing him play the Muay Thai (Siamese) fighter (as seen in the pic) in the film, The Quest (starring Van Damme & Peter Malota), I thought he would have been a good Joe Higashi but then if not Joe then why not his rival Muay Thai fighter, Hwa Jai!

Please do respond and let me know what you think of this blog, the characters and my choices.